Xavier de Figueiredo was born in 1947, in New Lisbon – at the time, name of the city that from its beginnings and until 1928 was simply called Huambo. There he lived until 1970. In 1971, after the military service, he entered as an intern in the drafting of the newspaper "the province of Angola", in Luanda. It was the beginning of a long and multifaceted career as a journalist, truly not yet closed and almost all spent in the field of African affairs. His first press article, reproduced here in the annex, was the subject of his homeland. It was in his teens that he wrote it. And with the uproar of a teenager, he saw it published in the newspaper "O Planalto", in Nova Lisboa. His first book, now an old man, is inspired by the same theme – now addressed from a historical perspective. To the ancient sense of attachment and affection to the earth, it combines a less ancient taste for history. 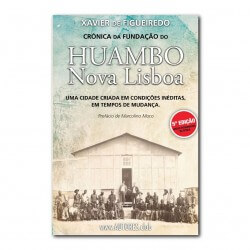