Born in Benguela with a lifetime in Luanda from 1942 to 2015, I am naturally and by the grace of the gods, Angolan of a heart delivered and paper past. For my parents, with their quiet quiet and rest in the warm and sacred Luandino soil, and by Camões and Fernando Pessoa, I am a descendant of the law. From other parts, with other poets and musicians I made them brother and so I'm Brazilian with nothing else, which is a lot.
Currently I go between Luanda, where I travel assiduously, except for the current impediment by the pandemic, and Braga, where I am living since 2015, to one side and on the other my minhota woman accompanies me and follows me as a muse.

The smells of mangoes and guavas, passion fruit and pineapples in the quindas of the zungueiras, their smile, and the red of the earth and the acacia trees in bloom, the recendent flavor of the dendem of calulus and muambas, the retemperof a muzonguê, the beaches, the great rivers, coconut trees, palm trees, casuarinas, the sacred bondeiro, the fresh mulembeira, the splendid poentes of the poets, the clear brightness of the children's gaze, their relaxedness and freedom, going to school, or doing for life, the immense variety of the people, their colorful, their cadence, their tones, their hopes and joys, the carnival, the spree, the rhythm and the rhythm, their struggle, the panoramic and vivid course of history in the face of my attentive eyes, the advances and setbacks, Angola goes, auá, Angola hurts, aiué, the great carnal and mystical odishe in the search for one People, of one nation, dreams, challenges, the longing empire of peace, from all this stems from my constant will of everything to paint by words, 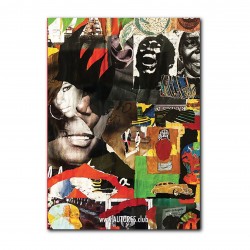