Father Clément MULEWU MUNUMA YÔK was born on June 30, 1961 in Kinkasa (DRC), is an Oblate Missionary of Mary Immaculate (O.M.I.) and ordained a priest on July 28, 1996 in Kinshasa. Former chaplain of Kikwit Central Prison (DRC) from 1996 to 2001 and luanda central jail (CCL/Angola) from March 2003 to April 2016. Former Parish Priest of the Parish of St. Andrew of Luanda (2011 to April 2016), Father Clément is also an animator of retreats and spirituality sessions. The author holds a Degree in Civil Law from the Catholic University of Angola and worked at MOSAIKO: Instituto Para a Cidadania/Luanda, as a Trainee Lawyer and Trainer from 2010 to 2011. Former Episcopal Vicar of The Congararia de Santo António/Archdiocese of Luanda (2012 to April 2016), Former Judicial Vicar of the Diocese of Caxito from February 2016 to February 2019. Member of the Episcopal Commission of Culture of CEAST, Lawyer and University Professor in Angola. Current mte Canon Law Student at ISDC of the Portuguese Catholic University since February 2019. He is the author of several scientific articles and some books such as:— Rendre Compte à Dieu et aux Hommes. Mission Prophétique de la Vie Religieuse, Baobab Editions, Kinshasa, 2004." To account to God and to Men. Prophetic mission of religious life, Editions of Angola, Luanda, 2007." To account to God and to Men. Prophetic mission of religious life, 2nd Edition increased, Editions Baobab, Kinshasa 2012.— Responsible paternity and motherhood from a legal point of view, Baobab Edition, Kinshasa, 2011.— Fatherhood and motherhood legally responsible until the death of parents, 2nd Augmented Edition, Baobab Edition, Kinshasa, 2018. 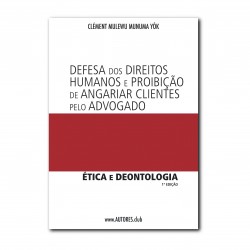